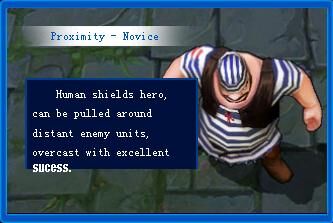 Afanti is the chinese name for Nasreddin. There was an animated series about him called "The Story of Afanti" which was very popular in China.

This character may have previously been the green Ogre Shrek.

Comparable to "Dr. Mundo" from League of Legends.

Power names and explanations taken from Google Translate, and from play-testing.

"With Avanti's reputation is growing, the fans let his life growing up and generosity, his ass is his estranged partner gradually, Avanti obsessed with thinking about how to get rid of this old donkey head and use it again to make the sum. Until one day he came up with a brilliant plan, he lied that it is possible to pull gold donkey head, and holding the donkey found innocent of Pakistan by master, to convince him to use all of the property in exchange for a donkey, then on Avanti became a rich man ...... classic, vintage and Pakistan by then become nothing - except the donkey. As he felt gloomy future, when it actually started talking donkey: "Dear friends, please do not be sad, I'm not a donkey, I Serengeti zebra Prince - Austrian zebra I have! Madagascar performances too, has many fans, if you can help me back to New York, I will give you a lot of treasure, dollars! you know? "naive and believed Pakistan by master donkey, then, oh, Austria Zebra words ...... So they hit the road, has experienced numerous stories, you can tell the whole Arabian Nights, eventually went into a place called the eternal legend."

Retrieved from "https://300-heroes.fandom.com/wiki/Afanti?oldid=7748"
Community content is available under CC-BY-SA unless otherwise noted.