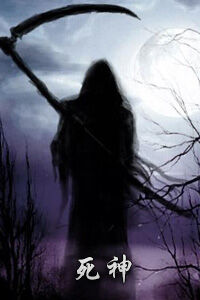 Grim Reaper is a phantom and ghostly assassin that wanders in minion/allied champion/heroes bodies.

Grim Reaper appears to be an original 300 heroes character.

Extra: The Hero consists of both gender voices.

WARNING~ These skill names may be inaccurate! Advise anyone who translates Grim's skills would be appreciated to edit them.

Grim throws a crest shaped soul that deals magical damage and slows it's target for a short duration of time.

Grim harnesses the souls it consumed for decades and enlightens it's scythe that'll deal magic damage on the next basic attack that ignores 10% Magic resist. (Unconfirmed ignoring magic resist pasive)

Grim inherit's itself inside an ally hero/champion or an ally/enemy minions. (Grim cannot Soul Bind through jungle monsters... including Molten Golem and Dragon)

Grim comes out with a following Soul Explosion that deals Magic damage in a short duration around it's host. Grim will be automatically forced out of the host if he/she dies.

R - The Storm of Haunting Spirits

Grim releases all of it's seceded enraged souls and deals an AoE magic damage around Grim. The Storm only lasts 10 seconds.

Retrieved from "https://300-heroes.fandom.com/wiki/GrimReaper?oldid=7878"
Community content is available under CC-BY-SA unless otherwise noted.