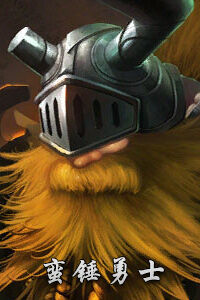 Kruger appears to be an original 300 heroes character.

Passive skills ,, general attack on the building of the damage caused by 150%, 20% lower probability of enemy units by 30% attack speed for 2 seconds

Passive: attacked by enemy units will reduce the target of an attack of their own units injuries within 5 seconds, you can accumulate

Wildhammer Warriors rapidly toward the destination, after the formation of the EU in its own force field crustaceans, increasing physical resistance and 50/70/90 50/70/90 point spell resistance for 3 seconds

Kruger Vikings are convinced himself bravely when killed in battle, he will be under the Valkyries escorts, across the Rainbow Bridge into heaven. Kruger convinced that their own record brave enough to get an audience with Odin. But all hope dashed! Because when he opened his eyes to see is not the death of a beautiful Valkyrie, but a twisted melon split dates of Summoner. He picked up a hammer huff, the Summoner hit turned to the ground. Labored, Summoner who just let Kruger did not understand that he died. The brave Viking warriors just been summoned into the eternal masters of the land, a paradise of war! Nothing more than "beating a hundred rounds" Let Vikings happier now! Kruger is now once again picked up a hammer, to fight for Summoners.

Retrieved from "https://300-heroes.fandom.com/wiki/Kruger?oldid=7767"
Community content is available under CC-BY-SA unless otherwise noted.