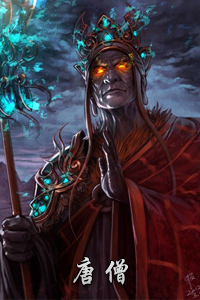 Monk appears to be an original 300 Heroes character.

Compare to: Similar to Lulu

Deals damage to all enemies and heals all allies in an area around Monk.

On Enemy Cast: Slows enemy. When an ally attacks this enemy, they are dealt damage and stunned.

Active effect: Shields target ally, increasing their armor and magic resistance. Enemies that attack this ally will be silenced.

After a short delay, Monk deals damage and stuns all enemies in a radius around him for a few seconds