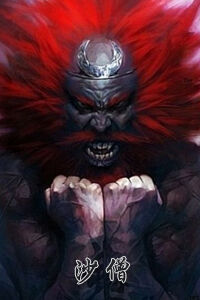 Shaseng appears to be an original 300 Heroes character.

He appears to be some sort of Merfolk.

Virtually identical to "Jarvan IV" from League of Legends

Hitting an enemy with a basic attack deals 8% of an enemy's current life in magic damage. This effect can only be triggered on the same target once every 6 seconds.

Thrust your totem forward, causing damage to all enemeis in a straight line and reducing their armor. If the totem hits Yueya Chan (E), Shaseng will dash to Yueya Chan, knocking up all enemies in his path.

Releases a magic wave of water with Shaseng as the center, creating a shield on Shaseng that absorbs damage. Each enemy touched by the wave of water increases the strength of the shield and is slowed. Babel Buddhist monk's staff

Active Effect: Throw out Yueya Chan to target location, causing magic damage to any enemies it lands on, and providing the Babel Buddhist Monk's Staff's passive effect to all nearby allies.

Shaseng boldly leaps to his target, inflicting Physical damage and forming a water dungeon of impassiable terrain in a circle around the trapped enemy for several seconds. Activate this skill again to remove the water dungeon.