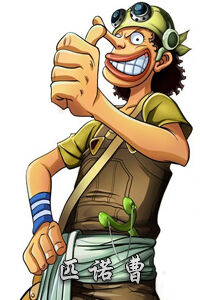 Usopp is a character from One Piece.

For some reason, though he has the image, avatar, skills, etc of Usopp, his background instead reflects Pinocchio from Disney, and they pretend like he has nothing to do with Usopp.

For every nearby teammate, you gain 4% increased attack power.

When alone, increases movement speed by 10%.

If the firebird touches an ally mid-flight, it gets faster, gains 20% increased damage, and lowers the cooldown by 1 second. This can stack up to 6 times on a single bird.

Activate: For the next 8 seconds, enemies nearby those struck by your basic attacks will take 20/30/40/50/60 spell damage. The passive effect is cancelled while the active is going.

Throw a large hammer that wishes it was 500 tons at target small area within medium range. After a delay, the hammer arrives, dealing 50/80/110/140/170 true damage. Minions hit by the hammer are stunned for two seconds.

Fire a blast at target area within massive range, dealing 100/140/180 damage. For the next ten seconds, Big Bang Star can be cast again every 1.5 seconds at a new target location, but the mana cost goes up by 20% with each cast.

Killing an enemy with Big Bang Star recovers 30% of your maximum mana.

Pinocchio came back from the moon only three weeks ago, and during that time he has met Snow White. These days Pinocchio has experienced the happiest time of his life. But, that did not last long, because he grew bored. One Tuesday afternoon, because there was nothing on TV, he and Snow White were very bored. So, Pinocchio decided to embark on a gaming adventure, to play 300 Heroes. He did not think. He told Snow White, "300 Heroes is a very good and strict game, very fine worksmanship... It's the best game of the last 20 years!" ...But then... He fell through space and time, finding himself within the world of 300 Heroes. In order to get back and be happy with Snow White once again, Pinocchio had to start his new life: To fight for victory.

Retrieved from "https://300-heroes.fandom.com/wiki/Usopp?oldid=7103"
Community content is available under CC-BY-SA unless otherwise noted.